10 of the most beautiful cemeteries in the world 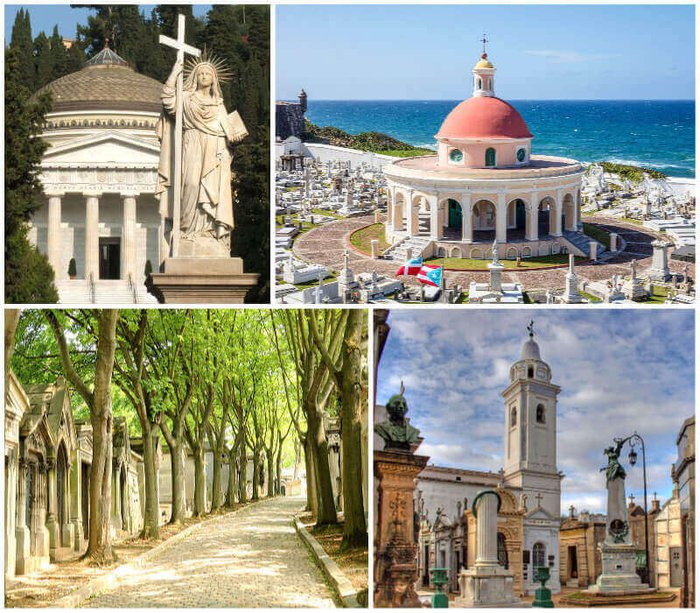 Graveyards and cemeteries are a testament to a country’s history, honouring lives lived, people loved and those mourned.

The stories behind the epitaphs and monuments, the craftsmanship and artistry behind beautiful tombstones, and the stunning landscapes they inhabit make them a wonderful sight-seeing destination, too.

Discover 10 of the most beautiful cemeteries in the world, from the cherry blossoms of Japan to the bohemian heart of Paris. 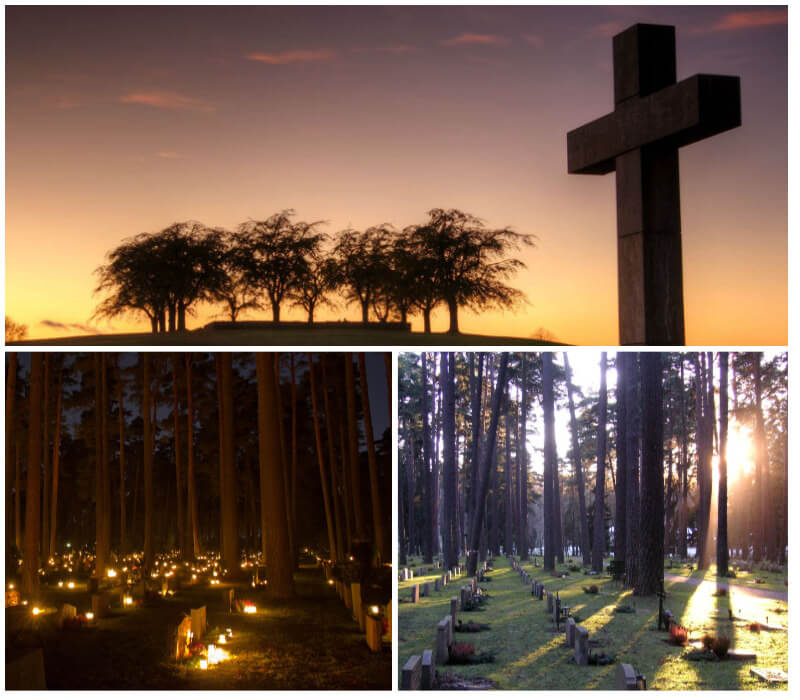 This woodland cemetery just outside of Stockholm was added to the prestigious UNESCO World Heritage List in 1994. Not only are cemeteries rare occurrences on the list, Skogskyrkogården was only the second heritage site from the 20th Century ever to be added to UNESCO’s list of the most culturally important places in the world.

Work began on the cemetery in 1917, after Stockholm City Council held an international architectural competition to decide who would design the new burial ground. The winners were two young Swedish architects, Gunnar Asplund and Sigurd Lewerentz, who were inspired by ancient and medieval Nordic burial practices.

Skogskyrkogården was a decisive move away from the neat hedgerows and perfectly straight pathways of the 19th Century cemetery park, aiming instead to work with the natural landscape of gentle hills and tall pine forests. UNESCO calls it an “outstanding example” of early 20th Century design, which profoundly influenced architects across the globe, making it one of the most beautiful cemeteries in the world. 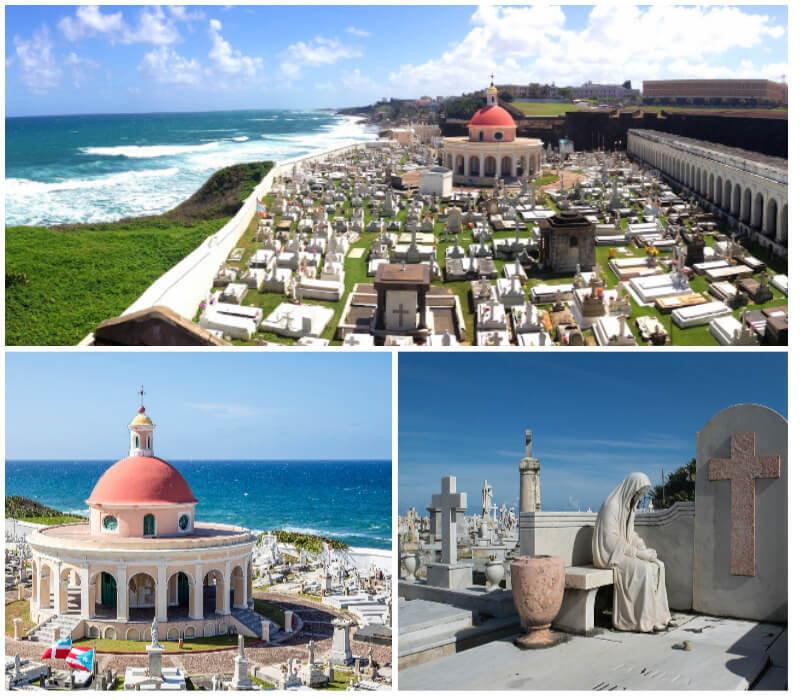 This stunning graveyard built overlooking the Atlantic Ocean is said to symbolise the spirit’s journey across into the afterlife. The blue horizon of the water is a beautiful backdrop to the white memorials within the graveyard’s walls.

The cemetery dates back to colonial times, with construction beginning in 1863. It is located right next to the 16th-Century citadel, Castillo San Felipe del Morro, one of the most popular tourist attractions in the whole of Puerto Rico.

Around 1,000 past residents of San Juan are buried at Santa María, including some of Puerto Rico’s most important politicians, actors and artists. The unique vista and heritage of this beautiful cemetery has made it a must-see for visitors to San Juan, with walking tours regularly stopping by to pay respects to the city’s past residents. 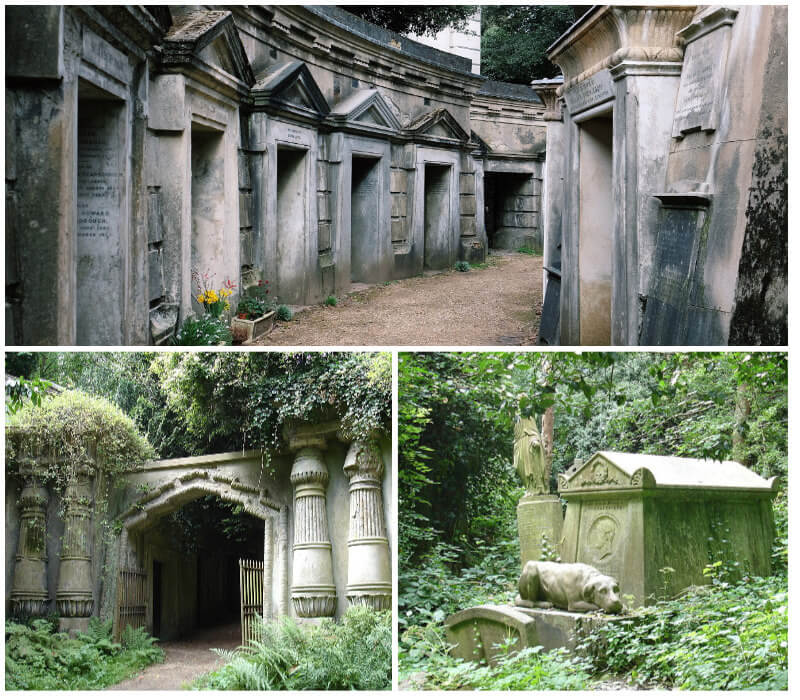 One of Britain’s most famous cemeteries, Highgate is a prime example of Victorian funerary architecture. Its renowned residents include philosopher Karl Marx, writer Douglas Adams and popstar George Michael.

This beautiful Victorian cemetery is divided in two halves; the older western cemetery and the newer eastern cemetery. When it first opened in 1839, Highgate became one of the most desirable burial grounds in London and Victorian families spent huge amounts of money creating unique tombs, mausoleums and headstones for their loved ones.

Among the incredible architecture of the cemetery is the collection of burial vaults known as the Circle of Lebanon (pictured above, top) and the impressive Egyptian Avenue gateway (pictured above, left). This older part of Highgate has been left to gracefully age, with lush foliage and wildlife turning the Victorian cemetery into a green oasis. 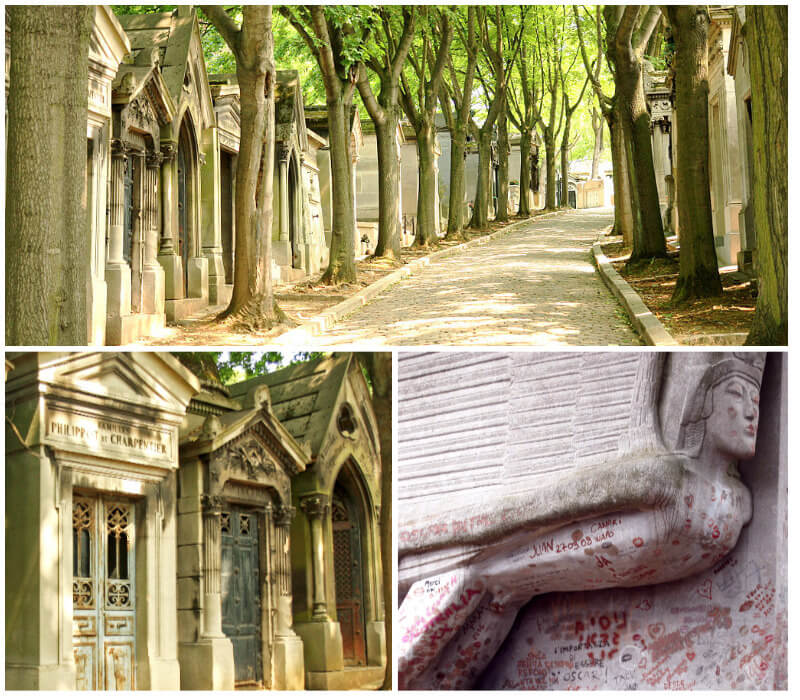 With more than 3.5 million visitors every year, Père Lachaise is the most visited cemetery in the world, and for good reason. Widely regarded as one of the most beautiful memorial grounds, it is home to some of the finest Victorian Gothic mausoleums and monuments.

Père Lachaise was one of the first garden cemeteries. The garden cemetery movement was a reaction to rapidly expanding cities in the 18th and 19th Centuries, which needed larger burial grounds. Garden cemeteries were designed like beautiful parks, with carefully landscaped paths and plants to be both practical and beautiful.

Many famous names rest in peace at Père Lachaise. The grave of The Doors frontman Jim Morrison is a popular place of pilgrimage for rock fans, while Oscar Wilde’s eye-catching tomb (above, right) still receives flowers and tributes from visitors on a daily basis. 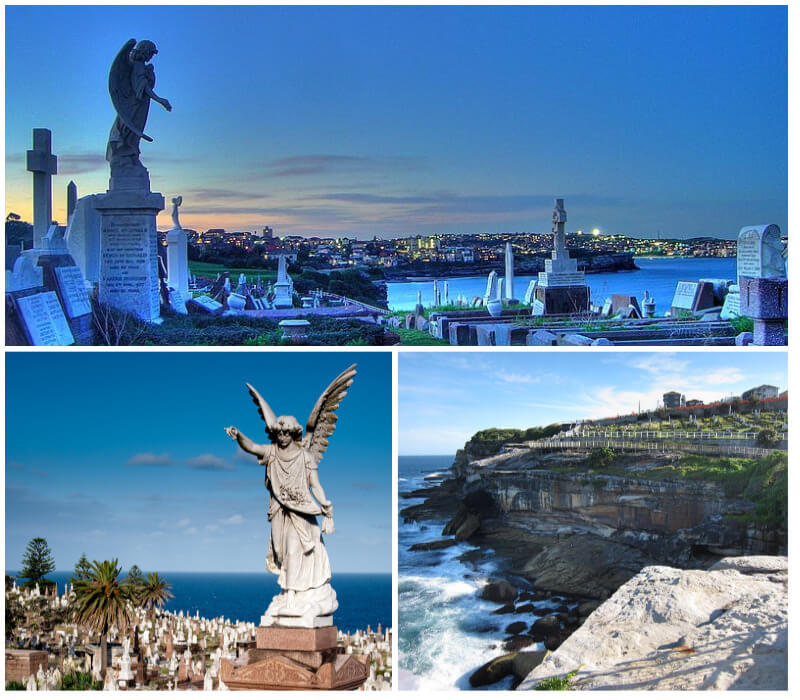 Opened in 1877, Waverley Cemetery often graces lists of the world’s most beautiful cemeteries, thanks to its picturesque position on the clifftops at Bronte in the eastern suburbs of Sydney.

The design of Waverley was inspired by burial grounds like Père Lachaise and other garden cemeteries. Many of its 19th Century tombstones and graves remain in beautiful condition and the graveyard is still open for new interments - although burial plots are in high demand, with plenty of Australians loving the idea of a final resting place by the sea.

Waverley is also home to some of the famous faces who shaped the culture and history of Australia, including writer Louis Becke, poet Dorothea Mackellar and New South Wales Premier Sir James Martin. Henry Lawson, one of Australia’s most famous poets, often used Waverley Cemetery as a setting in his writing, and was eventually interred there in 1922 with an eternal view of the ocean. 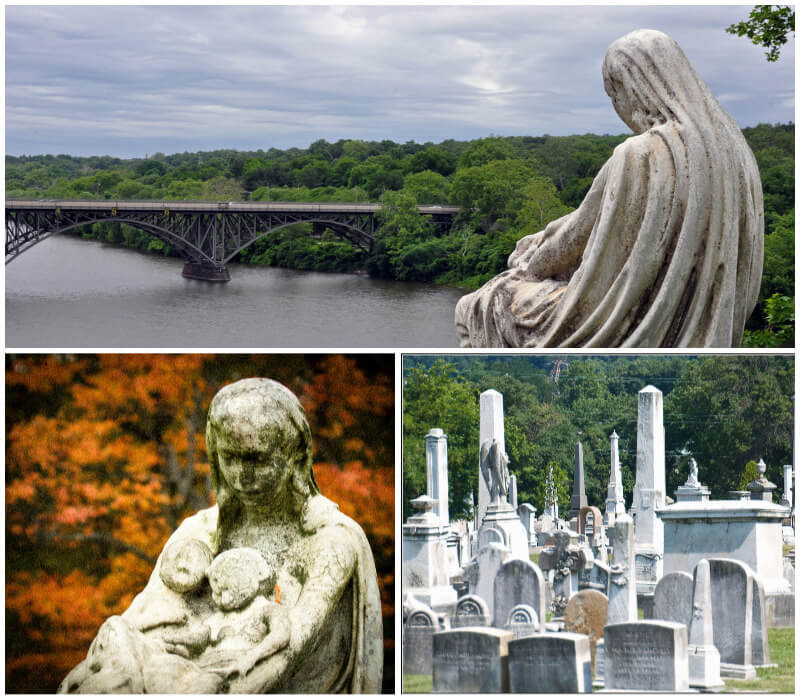 In 1836, Philadelphia librarian John Jay Smith decided to build a cemetery at Laurel Hill after he struggled to find a final resting place for his beloved daughter. Overlooking the Schuylkill River, Laurel Hill is not only a beautiful 19th Century graveyard, it’s also the site of some true American history.

No fewer than 42 Civil War generals are buried at Laurel Hill. A tree known as the ‘witness tree’ or the ‘Meade maple’, grew on Laurel Hill. Ulysses S. Grant and William Tecumseh Sherman were said to have sheltered beneath this tree to pay their respects after the Battle of Gettysburg. Sadly, the witness tree had to be felled last year, having grown too big for the memorials surrounding it.

One of the cemetery’s most famous sculptures is the Mother and Twins (pictured above, top and left). Carved by a Polish sculptor to commemorate his wife and their two children, the statue overlooks the Schuylkill River where the twins tragically drowned. Though much of the grave’s inscription has been worn away by the weather, you can still see the part that reads: “We should count time in heart throbs.” 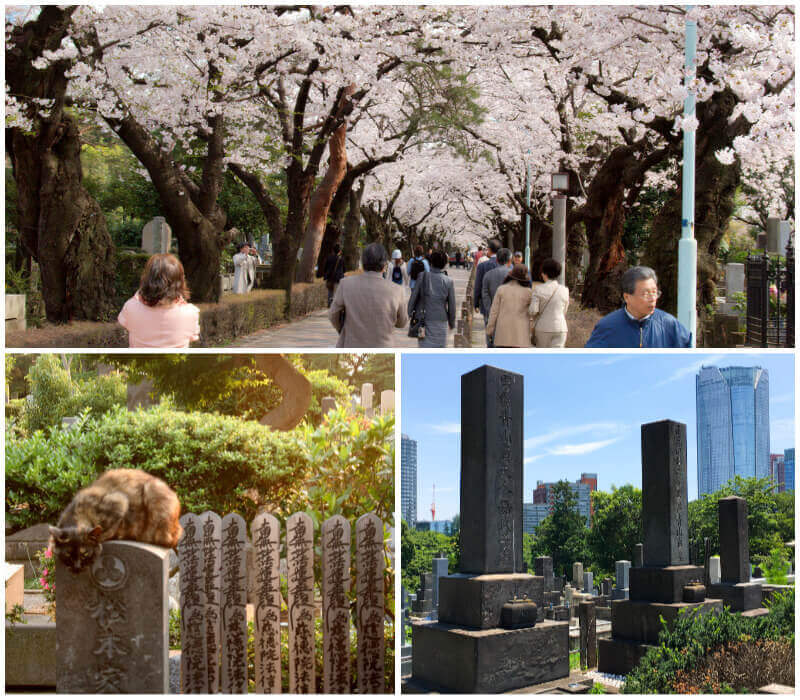 Aoyama Cemetery is a popular tourist destination during the season of Hanami (meaning ‘flower viewing’), when cherry blossoms all over Japan come into full bloom and people enjoy the transient beauty of their delicate pink flowers.

In the heart of the Minato area of Tokyo, Aoyama is a peaceful oasis where, like many graveyards in the city, stray cats hang out and bask in the sun. Tourists love photographing the gangs of cats wandering through the gravestones.

Aoyama is also a destination for sightseers because of its famous residents, from 19th Century samurai and famous actors of traditional Kabuki theatre, to Hachikō, Tokyo’s beloved faithful dog. Hachikō was an Akita who would wait for his owner every day at Shibuya Station - and continued to wait there for more than nine years after his owner’s death. Hachikō was cremated and his ashes were buried next to his owner in Aoyama. 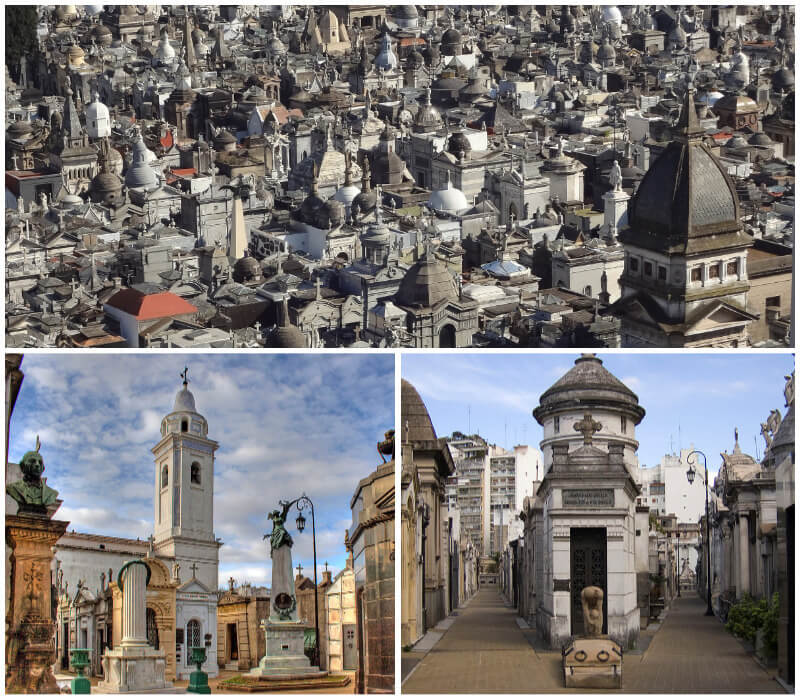 Photos by HalloweenHJB and Andrew Currie

Often heralded as one of the most fascinating and beautiful cemeteries in the world, La Recoleta is the final resting place of many writers, artists, Argentinian Presidents, and beloved First Lady Eva Perón.

The cemetery dates back to the 1700s, when monks called the Order of the Recoletos built a convent and church there. When the Order disbanded in 1822, the grounds were converted into a graveyard for the citizens of Buenos Aires. A French civil engineer called Próspero Catelin designed the layout to be like a city, with branching paths dividing the cemetery into blocks.

Argentina’s famous First Lady, Eva Perón, was finally interred there nearly 20 years after her death, after a period at a crypt in Milan, Italy. Her mausoleum in La Recoleta is said to be so secure it can withstand nuclear fallout, in order to deter those who still want to steal the casket of the famous Evita. 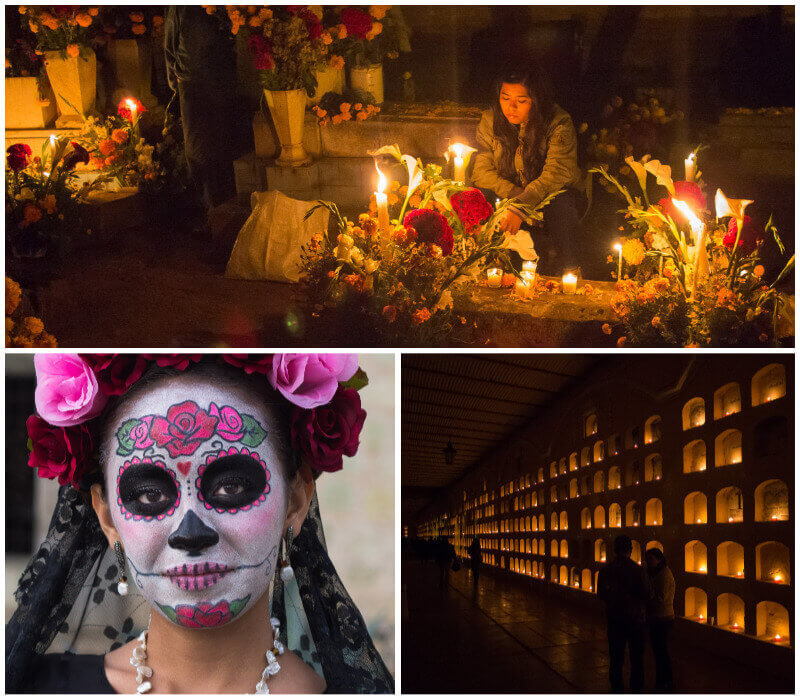 Oaxaca City’s cemetery is filled with graves and tombstones of all different sizes and styles, but it is during Dia de Muertos, or Day of the Dead, when the cemetery is at its most beautiful.

Every year on November 1, Mexicans gather to clean and decorate their loved ones graves with marigolds - a traditional symbol of death - candles, flowers and gifts. On this day, cemeteries all over Mexico are transformed and become a riot of colour; orange, bright pink, yellow.

Though it is a time for remembrance, Dia de Muertos is also a time for celebration. Many people dress up and paint their faces in a traditional sugar skull design, after a small sweet candy made for the occasion. Processions to and from the graveyard can include live music, singing and dancing, making this a unique time to visit the beautiful cemetery in Oaxaca. 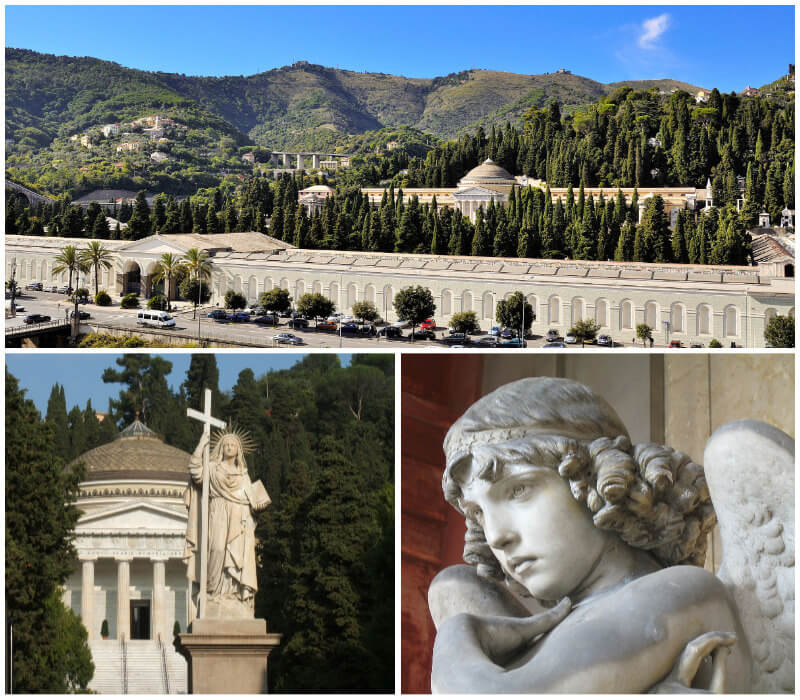 Photos by Twice25 and Maurizio Beatrici

This hillside cemetery outside Genoa, Italy, is one of the largest burial grounds in Europe, stretching over a square kilometre among the verdant rolling landscape.

In the 19th Century, when the project to build Staglieno was first begun, Genoa was a major intellectual and cultural hub in Europe, with artists coming from all over the world to hone their skills and meet other like-minded pioneers. As a result, many highly-skilled sculptors called Genoa home and contributed stunning memorial masonry to this cemetery.

At the centre of the extensive grounds is a statue of Faith (pictured above, left), sculpted by the famous 19th Century sculptor Santo Varni. The building behind it is based on the domed Pantheon in Rome, with a classic Italian portico with Roman columns. It’s a beautiful example of 1800s Italian architecture and some of the most beautiful cemetery architecture in the world.

A guide to ideas for Christmas memorial gifts to give to someone in memory of a loved one who has died, such as DIY remembrance ornaments 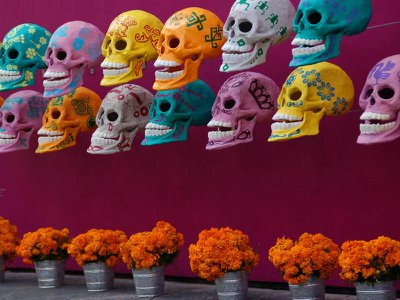 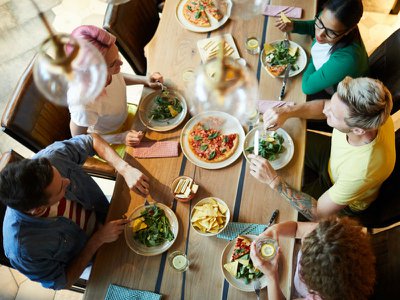 Millennials are breaking the painful silence that can follow grief, over dinner with strangers at a groundbreaking supper club